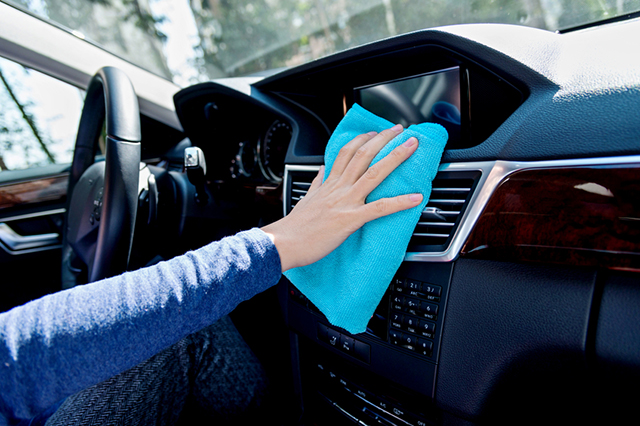 When I first heard about waterless car washing products I was skeptical. Being a car guy who takes a certain amount of pride in the appearance of my vehicles, I had long ago developed a method for detailing my cars, and water was definitely part of the equation! A neighbor of mine was regularly using a waterless car wash product, and introduced me to it. I tried it and was very favorably impressed. It was easy to use, cut straight through the grime, and took about half as long for me to clean my car. But what impressed me the most was the shine, looking as good as if I had waxed it. In light of these things, I’d say my initial foray into waterless car washing was a success. Still, I wasn’t ready to give up my hose and bucket method just yet. Instead, I kept tabs on my neighbor and his car over the next three years. I wanted to see how well his paint finish looked after repeated use with waterless car wash products. He owned a black pickup truck, and after three years the finish was as deep and as glossy as the day he brought it home for the first time. Still, a creature of habit, I stuck with my hose and bucket method. It wasn’t until I moved to Florida and discovered how expensive water usage is here (this state is surrounded by water, and I’ve got about 13 ponds in my neighborhood alone, so how can water be so freakin’ expensive?!!) that I really decided to hang up my hose and bucket and go waterless. I’m glad I did and here’s why:. I have faith in commercial car products that are used by professionals around the world and now you can get those same professional results at home.

1) These products work! Whether you’re using standard waterless products such as Dri Wash n’ Guard, or an environmentally friendly product such as Eco Touch, this stuff works. I won’t go into detail too much here, but basically you spray a section of your car with the product, and the dirt is lifted off the surface and trapped within the foamy liquid, which you gently wipe off with a microfiber towel. You then take a second towel and quickly buff the paint to bring out the shine. Oh and it does shine. No scratches either, surprisingly.

2) Waterless is cheaper per wash than the Hose and Bucket method. Consider that to wash a standard sized vehicle, you use roughly 100 gallons of water, or as much as 250 gallons if you’re one of those big manly truck dudes. That water shows up on your water bill, and if you’re washing your car every week (like you should be) then those washes are putting a sizable dent in your water bill. Look it up. Then consider what you pay in car wash soap, bug and tar remover, wheel cleaner, mitts and chamois and all the other stuff. Washing with a hose and bucket isn’t as cheap as you assumed it was.

3) Waterless is so much faster. No brainer here. You spray one section of the car at a time, wipe it off, and move on to the next. I drive a small car, and I can clean it all in 15 minutes. Previously it took me that long to get out the hose and bucket, fill the buck and wet the car down! And don’t get me started on how long it took to dry the car with a chamois. With waterless I’m probably most pleased about not having to dry all that hard water off of my vehicles.

4) Waterless is immensely more convenient. I mentioned some of the hassles of the hose and bucket method above. With waterless you don’t even have to pull the car out of the garage! Just grab the bottle of waterless and your two rags and off you go. Speaking of go, throw it in the trunk and take it with you. The next time you’re tapped to drive everyone to lunch, take a couple extra minutes and wipe your car down before you go. Like I said before, to a car guy this stuff is important!

5) Waterless is greener. It’s not often that you meet a car guy who’s genuinely interested in helping the environment. I’m not that guy either, really, but when it’s this simple to be “green” then it’s hard to ignore. Going waterless means that not only are you saving at least 100 gallons per wash, but that 100 gallons was never polluted by your car grime and the chemicals you used to wash it. And then that 100 gallons wasn’t swept down your driveway, down the street and into the storm drain where it eventually made its way to a lake or river.

Saving money, time, and being more environmentally conscious, all while maintaining a brilliant shine on your vehicles has never been easier. You heard it hear first: Waterless car washing will one day be the standard. So go ahead and try it!